How do I deal with my boyfriend's kids? 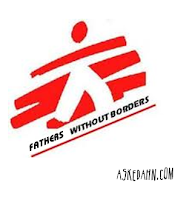 I met a guy who I really get along with. He has a five year old and 2 older daughters, 25 and 32. I'm younger than he is and have never had kids. The 5 year old loves me to bits but the older girls are harder to deal with.

The older one has 2 kids who come over all the time and trash the place. The 25 year old has a boyfriend, but he's gone every other week. During that week, she spends a lot of time at her dad's. The daughter has a 5 month old son herself and can't seem to do anything without her dad. She needs him to go shopping with her because it's too "hard" to shop with a child. If we're both at the house, she'll decide to go to the store for food and asks her dad to go with her. She pulls him away when I'm there. It's not just because I'm new and she's possessive; I think she has always been like this. I think he goes along with whatever she does to keep the peace. He relies on her too, for babysitting needs. Do you think I should leave? I love him but it doesn't outweigh the family issues.

IT SOUNDS TO ME like your boyfriend has an issue with boundaries. He's letting him oldest daughter (and her kids) do what they want with the place, and letting his younger daughter take up his time--time you consider "yours." Why is that? These things have multiple causes. Maybe, as a single dad, he's letting his children do what they want to keep them happy and close. Maybe he never had boundaries himself. Maybe he likes feeling useful. And then, maybe it's part of an implied bargain as you suggested.

A couple of things are clear to me. One, that if this is a longstanding issue, he is going to have to intervene to change things. Two, that changing things is going to be tricky: his daughters are not going to want to change; they may take his attempt to put up a boundary as a threat; he is probably getting certain payoffs (like usefulness, attention) from the arrangement; and he isn't going to want to risk his relationship with his daughters.

One of the issues can be dealt with easily, and that's the older daughter's kids cleaning up after themselves. You can have a talk with him and explain some of what you've seen and how having boundaries and teaching responsibility is healthy for a child. Not to mention, having a clean house is healthy for everyone living in it. He doesn't need to have a big drawn out confrontation with the daughter. When the kids start playing, he can say "okay kids, the last time you came here everything with a huge mess. I had to call Shrek just to help me clean it up! So this time remember to put everything away before you leave. Okay?" (Depending on how old they are, of course.) Ten minutes before they leave, he should announce that clean up time has started. He shouldn't let them leave until everything is put away and it's important that he not let anything slide.

The more complicated issue is with the younger daughter. It sounds like she's not comfortable doing things alone. Maybe it makes her feel lonely. One thing you can do is get to know her a little more. You don't have to be her mom. Just get to understand her world, without judgment. Maybe you can join your boyfriend and his daughter when they go shopping. The other thing you can do is try and schedule time in with your boyfriend. Plan some time for yourselves in advance. Show that you understand his situation, but explain that you want time with him alone. Don't try and convince him to change, just help him see the reasons why. Ask him to respect that and let him know that it's important to you and to your relationship. He'll have to learn how to say "no" to other requests that conflict with your time.

If he can learn to set up boundaries, them maybe things will work out. If not, then you need to ask yourself what your life will look like with this person and whether you'll be satisfied or not.

Got a question? Ask here.

Email ThisBlogThis!Share to TwitterShare to FacebookShare to Pinterest
Read more about boundaries, children, dating, how do i deal with my boyfriend's kids, no boundaries, relationships, setting boundaries, single dad