There's a story in Lieh Tzu called Fortune and Worth (#63) that I want to share with you. Read it, because it'll stick with you.


One day Pei-Kung-Tzu visited his old friend Hsi-men-tzu. The two were friends who grew up in the same village, but due to different circumstances, hadn't seen each other in years. As soon as PK saw HMT, he started to wonder outloud: "We both came from the same village. We had similar families, and went to the same schools. But you turned out successful. You have a great job, a great house, a great family, lots of interesting friends, and a sweet carriage ride. People respect you and trust you. Meanwhile, I've ended up the opposite. I have nothing, no family of my own, my job sucks, my car is beat up, I like in a beat up apartment in the worst part of town, and no one respect me or cares for me. FML We both had similar jobs and you got promoted while I got demoted. We both invested in stocks, but when you made profit, I lost big. You eat great food while I eat scraps. It's just not fair. When you see me on the street, you ignore me. Is it because you think you're more worthy than I am?" 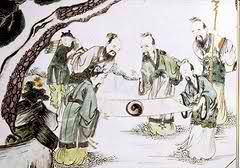 HMT was a little uncomfortable. Condescendingly, he suggested that he was more worthy and chastised PK for deigning to compare his worth to that of his own. PK left feeling dejected and ran into one of the smarter guys living in the city. He explained what happened and the wiseman, Tung-kuo, headed back to HMT's house with PK. The wiseman asked HMT to explain what happened. HMT explained: "I told him that the reason I was more successful than he was was due to the fact that I'm more worthy."

TK broke it down for both of them. He said that they both were measuring worth through social and political success, though he saw it differently. Rather than being a reflection of their wisdom or virtue, HMT's success and PK's failure were a result of luck. "Whether you have luck or not is not something you can control," he counseled. "You should not be presumptuous because you have more luck and likewise, he shouldn't feel worthless because he has no luck. Both of you are blinded by your ideas of worthiness." Upon hearing this, HMT vowed never to boast again. TK went home and wasn't ashamed of being poor anymore. His tattered clothes felt like designer label furs. His microwavable dinners tasted like the finest gourmet food, and his apartment seemed like a mansion. He no longer saw things in terms of honor and disgrace, recognition and anonymity. He lived the rest of his life quietly and contently.

I THINK MOST OF us struggle with our self-esteem at different points in our lives. Sometimes it's obvious and on the surface, other times it's subtle and buried deep inside our mind. Sometimes our self-doubt rears itself in certain situations like dating or job interviews or meeting stereotypically "successful" people. We psychologically contract in their presence and doubt whether we're worthy enough to sit there comfortably. We present lists of what we've accomplished and try and flatter our way into acceptance.

What this story teaches us is something we already know deep down but too often forget: that our self-worth isn't a byproduct of our success, but of the kind of person that we are, i.e., the virtue that we possess. When we treat others with dignity, care for them, and live responsibly -- when we try to be good people and when we recognize that goodness that we cultivate -- we no longer feel that we have to justify our worth to other people. We know down to our core that we're worthy and have nothing to be afraid of. We can just be there quietly, with humility and integrity.

If you can identify times when you begin to question yourself, take a second a look at how you've calculated your self-worth. How are you evaluating yourself in that situation? By your looks? Your bank account? Your success in dating or in building a family? Your job? Your intelligence? Your ethnicity? Your confidence? Your social skills? Take a lesson from the Taoist and ask yourself if you're a fundamentally good person. Be fair, but be honest. Do you care for others? Are you honest with them? Do you treat them fairly? Do you listen to your conscience? If yes, fuse that understanding with your self-esteem and never question it so long as you live honorably. If not . . . get to work!