What does it mean when your boyfriend wants to take a break? 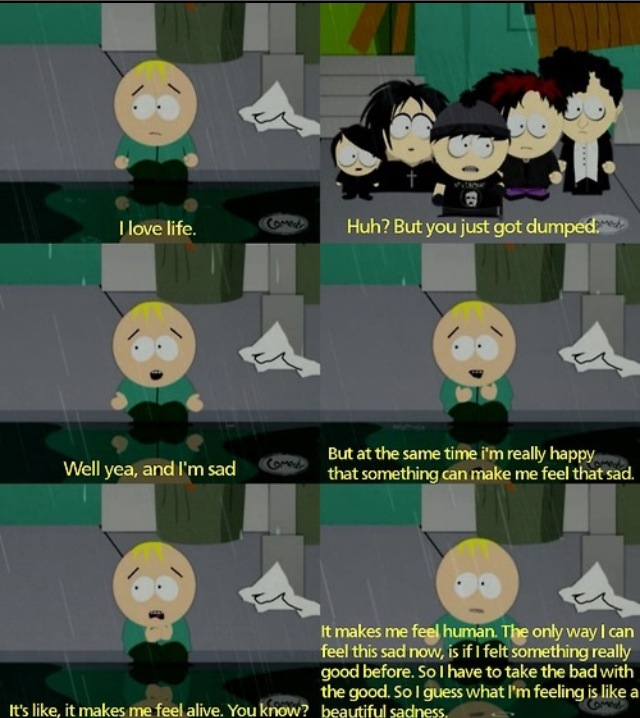 My boyfriend and I have been together for 3 years. In those 3 years it was the best. We were so sure we are soul mates and we also talked about getting married and all those talks no one ever has with their boyfriends. We had the best time of our lives. We both have admitted that we are meant to be together forever. He was 14 and I was 16.

Recently he decided that we needed to go on a break for awhile which devastated me. He said he doesn't want to do it but he feels like he needs to. He said he needs to appreciate me more and that by spending time away from each other and being on a break he will be able to come back one day and make it even better. He doesn't know life without me. I guess he just wants to gain perspective and know what it is like out there. He said he wants me to wait but also have fun at the same time. Which I don't really understand.

Im having trouble accepting the fact that he chose to leave instead of working it out with me, together. Its has only been a week and Im' falling apart because I don't know if he's out there enjoying himself single while I'm brokenhearted. What should I do?

I THINK YOU'RE HAVING trouble because he sent you mixed messages. His words said: "I love you I want to be with you indefinitely" while his actions said "I'm not really sure I love you, I don't want to be with you." So here you are with these two different stories that don't fit...unless you consider the possibility that either his feelings changed or (and this is the hard part) that they weren't as strong as he led you to believe. I don't know which one it is, and it's possible that even he doesn't know. But maybe it doesn't really matter that much because either way, he's moved on and doesn't have the same feelings for you that he had before.

So where does that leave you? I'm sure you're in a lot of pain. All I can say is that in a few months, you're not going to feel this bad. You're going to move on and feel whole again and you're going to feel excited about making progress in your life, your education, your purpose, goals, and whatever else you choose. For now, you have to try and work with your feelings, instead of working against them. By that I mean, rather than ignoring them or giving them too much attention (both mistakes), you can try listening to how you feel and finding a way to let that feeling come out in a way that makes sense.

For example, when I'm feeling sad, I sometimes take a pad of paper, sit outside a Starbucks and draw. I'm a horrible drawer (like, HORRIBLE), but it's a way for me to get in touch with that feeling. It guides me and my art. Other times I might listen to some music and pretend I know Tai Chi and move around my room in slow motion. (Yes, it looks really weird.) Just about everything I do when I'm sad looks really weird, but hey, it feels right and it pulls me together. I discovered these things by accident by just letting the feelings flow through me and direct my actions.

So what types of weird things can you do?

Got a question? Email AskEdahn@Gmail.com.

Email ThisBlogThis!Share to TwitterShare to FacebookShare to Pinterest
Read more about break up, relationships, What does it mean when your boyfriend wants to take a break?

Hello I think Edahn always has great point of view :) However I see something in her description that I wanted to speak upon. I understand that you have hurt feelings, I would too. One thing that is important to realize is that when a man wants space to do his own thing - the best thing to do is to give it to him and refrain from contacting him (at all). He will come back to you because I feel he loves you. In the mean time just do things you love, things outside that make you happy. I know its not easy but I have also been in tough situations. And its good to know when he comes back he means it... :) although when he comes back play hard to get !! - W