The guys I want don't want me, the guys that want me I don't want 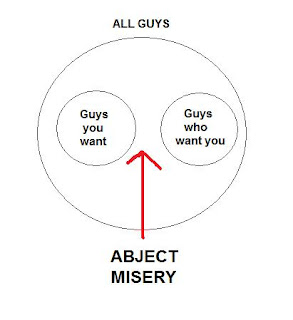 Why do all the guys I don't want want to be in relationships and or marry me, and the ones I do want just want to have sex and aren't interested in marrying me or starting a relationship? Will I ever get married and have a family? I've been dating since I'm 16, I'm exhausted...where is he already?

Will you ever get married and have a family? Who do you think I am? The Psychic Friends Network?

After much deliberation and consideration, this is what I've got. Men and women have certain value that establishes their "rank." The value I'm talking about isn't existential, philosophical, we-are-all-God's children value, but perceived value. When you walk into a bar and can identify who's at the top of the social pyramid, you're intuitively sorting rank. You can also think of it as perceived status.

So what's status based on? A woman's status depends on her physical attractiveness which includes what she looks like, how she carries yourself, her body language, self-confidence, voice, clothing, and even who she associates with. A man's status depends on his perceived power, which includes how much money he looks like he has, his body language, his clothing, accessories, voice, intelligence, self-confidence, and humor. All of these indicate power, which indicates access to resources like money, food, and shelter, which means security.

Status isn't fixed and a lot of people put effort into improving their perceived status. Diet fads, plastic surgery, and designer-label clothing are 3 industries that have developed around the desire to improve status. It's the same reason men are bombarded with advertisements for sports cars, gym memberships, and designer clothing. A lot of the Self-Improvement movement, part of which I belong to and part of which I denounce, has capitalized on this need -- literally.

When you meet a guy, he places you into one of 3 categories: Sex Only, Marriage/Relationship, No Thanks (which includes the insufferable "Friend Zone"). For admission into the Sex Only show, you need some minimum status. Marriage/Relationship requires a higher level of status in addition to some homemaking skills like warmth, child-rearing skills, cooking skills, and neatness -- skills that his mother likely possesses. Hence the attraction to people that resemble his mother. The amount of status that you need depends on the amount of status the guy feels he has. While the Sex Only threshold can be pretty low, I'm convinced that when it comes to marriage, men look for women equal or slightly less status than they have, but I'm open to the possibility that many men seek women who have very high status who they want to acquire. Yes, acquire; in my opinion, this isn't love but a form of possession that either results in bad or empty marriages. Women, on the other hand, seldom have a Sex Only zone (unfortunately) and tend to place men in the Marriage/Relationship category, or the No Thanks category. I believe that women look for partners with equal or slightly more status than they have. Sometimes women look for partners with much higher status than they have.

And finally we get to you. I can't say the exact reason you're not falling into a certain guy's Married/Relationship zone, but it's either that they (a) don't feel you have enough status or (b) that they don't identify you as a potential homemaker. There are lots of reasons that can happen. First, you may just be totally out of your league, choosing someone with incomparable status. Don't take this personally, but it's the truth. I'm never going to marry Angelina Jolie, not just because she probably wouldn't convert to Judaism to appease my parents, but because I have nowhere near that status. Second, you might be doing things to sabotage your status: neediness, playing games, acting young, and not taking care of your presentation. Third, you might be low in the homemaking-skills department or even doing things to demonstrate that you're not ready for such a role. Too much partying, playing dating games, and excessive drinking will disqualify you in that category. And regarding the men you don't like who want to marry you, it's the same analysis, just switch the genders. They're wondering the same thing.

My advice would never be to just give in and be the kind of girl a guy would want you to be. I think that's an insult to your integrity and it's a shame so many magazines and pundits preach that message. My advice, instead, is to hold your head up high and do things that boost your sense of pride, not for any guy, but for yourself. You can also solicit some feedback from honest guy friends about any needy or annoying habits you might have picked up. Put the question of relationships on hold and go befriend as many people as you can, guys and girls. Friendship is the best way to show off your domestic skills, maintain your integrity and status, and avoid the biggest trap that all these dating "experts" unknowingly advocate: turning into someone else, thinking they're respect you afterwards. No one respects a person who seeks approval from them because by doing so, you sacrifice all your status which is the thing you're trying to get to begin with.

DAMN BRO, YOU ARE GOOD AT THIS...WELL PUT>

I agree with you except that you are a bit old fashioned. You didn't mention intelligence as a quality that can improve a girl's status, which I think definitely can. Also, girls put guys in the sex-only category on a regular basis. I know I do, lol.

Hm. I don't doubt that you do, but I don't think more girls do that. I'll take another look and see what I find.

Regarding female status and intelligence, I think it's a tough call. I thought about it and started to agree with you, but now I'm not so sure. Think about it this way: who would have more status in the eyes of a potential male suitor, a hot stupid girl or a smart ugly girl? Also, who would have more status and command more respect as between rival females? I think that in most cases it would be the attractive dumb girl unless the smart girl also happens to be aggressive, which is a different story altogether.

I do think, however, that nowadays income and career drive status for females.

Errrrr....edahn sometimes I wanna smack u but this time ur right on the money u pretty much confirmed my reasoning behind y I'm single and the fact that most men would like somone as an equal, but what about the hypocritical side of this?, the guys who claim they want the non- party girl, the nurturer, motherly type but are completely ass backwards in their actions ie. (They party, get drunk, don't show any maturity in them selves) so what I'm sposed 2 be susie home maker while ur piss drunk at a strip club?! Not that ur wrong in any of this I'm just saying its a two way street.

This should be part of every school's curriculum, just brilliant.

I was thinking about expanding on this and turning it into a chapter or series of posts. Thanks for the encouragement Alice. :)

how to catch a cheating husband said...

Do you know that crossing your arms can be taken as a sign that you’re on guard? While subtle touching during a laugh or smile can play in your favor, keeping your arms crossed can have the opposite effect.