Does size matter (to me)? 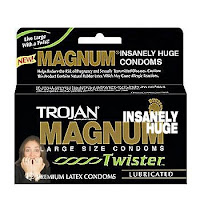 I had sex with a well-endowed guy and now I'm having a very hard time having sex with regular sized men, never mind the little guys. I know that this is not the most important thing in a relationship, but every time I have sex I keep thinking how much better it was with Mr. Big. While it's true that it's not just what you have, but how you use it, there is a minimum threshold beyond which I can't even tell that I'm having sex, and he's reminded me that this is a BIG deal. Will I ever like someone so much that I won't care how small he is, or should I just start picking up guys in the Magnum section of the condom aisle? (and, how do I break up with my current beau over this-- should I tell him I'm "just not feeling it"? :P)

First off, there is no "Magnum section" in the condom aisle. I know because every time I go to the supermarket, I say really loudly: "EXCUSE ME. CAN YOU TELL ME WHERE THE MAGNUM CONDOMS ARE LOCATED?" They always just look at me weird.

So you're having sex and can't stop thinking about what you're missing out on. Forget about trying to make those thoughts go away by rationalizing them or suppressing them. That just turns people into nervous mental control freaks. It's exhausting and will prevent you from relaxing and actually, possibly, enjoying l'amour. Lets just accept that you're going to keep having these thoughts for now. Let em all in: the disappointment, the disconnection, the resentment, the frustration, the comparisons, and any attempts you make to change all of those. Just let it all be there in the background (or even foreground).

Now ask yourself what you still enjoy. Obviously "his massive manhood" isn't going to top the list, but there may be some other things that are kinda cool: the way he kisses, the way he moves, his level of relaxation, his attentiveness, etc. Accept the bad and see what's good without being in a rush to measure it and evaluate it. You might find something nice and fulfilling, you might not. Give it a couple weeks. If it's just not there, you can just tell him that you're looser than a pair of old Levi's you don't think the chemistry is quite there. Leave it vague since this isn't something he can fix.

As much as I want to tag this with "grow some balls," I'm going to resist.

Comment: One man I have slept with was, shall we say, long and slender and the other man I have slept with was short and rotund. I personally enjoyed the short rotund version as it created more friction for me; however, should I ever meet another long and slender, there are aides that can make the experience swell (pun intended)! Try experimenting with sex toys to increase your pleasure like cock rings, or vibrating cock rings. There is also a vibrator (WeVibe) that you can wear at the same time you are penetrated--it is awesome!
Just some ideas. Don't dump the man if that is the only issue. Good men are hard to find.

And hard men are good to find! HEYO!