Making serious disclosures to your partner 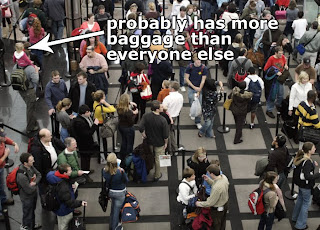 I've got kind of a serious one today. I am 27 years old, and I was sexually assaulted by a stranger 7 years ago. I have since spent a lot of time in therapy recovering, and have made substantial progress. I started dating again not too long after the incident, and entered a long term relationship with a man I had known since before the rape, so there was no need to explain to him why I needed to move relatively slowly. We broke up a couple of years ago, and I have tried to date again. So far I have not had a relationship last more than 3 months, and I feel like this might be because I move too slowly sexually, as I'm still somewhat cautious about becoming sexual with a man too quickly. I feel like at some point I need to be honest and tell my new suitors about my past, but I'm not sure how to do this without totally freaking them out. I know your general approach is to coat everything serious in humour, but in this case I think that might seem kind of manic. Do you think most men would be scared away by my past? And what is an appropriate point to bring it up?

I have never met anyone who hasn't experienced something traumatic that has fucked up some aspect of their life. Some people discuss it, some people obsess over it, but most people hide it because they're afraid of appearing defective to others. They're afraid of showing their hurt and it makes them feel alone in the world.

The irony is that we've all got this baggage. And mind you, I'm not just talking about bitching how you can't find someone, but deep pain and shame for things we think brand us as "fucked up." For some people, it's depression, others anxiety or low self-esteem, others physical qualities, intelligence, accomplishments, inferiority, whatever. But since no one's saying anything about it or showing it, everyone thinks they're alone, and because they think they're alone, they don't say anything. It's like a class full of virgins where everyone brags about their sexual conquests for fear of being identified as the lone virgin.

It's okay if you've got this issue you need to work out because we all have those issues. Don't just read that. Meditate on it, internalize it, and incorporate it into your world view. Look around you and take a guess what people's hidden baggage is right now. Can you see it? (This, by the way, is the part where one of the virgins gathers the courage to say "hey you guys. I'm actually a virgin," to which the other dorks rejoice "no way, us too!") We're all in the same boat as you are, all the same, all connected. But we forget about that judge others for having baggage the same way we judge ourselves. Maybe you already knew all this, but it's important stuff anyway.

So now to your question about disclosure and relationships. Just be smart and be thoughtful. Tell him when you think it's important (2 or 3 weeks?), and just try to be as sincere as possible in your delivery. He's going to be wondering what that means for him and his prospects of intimacy (emotional and sexual) with you, so you can give him a head's up if you know. You might say "it doesn't mean I'll suddenly freak out and have a flashback, but it means I want to get to know you first and feel comfortable." He'll probably be curious about it. If you feel comfortable, share. If it's painful to talk about, that's okay; give yourself a little nudge. Some people will respond well to your disclosure and open up, others won't. That's expected.

Quick story: I went on a date a while back with sweet girl who was very interested in self-improvement and Buddhism, probably more than I. Just before heading into the bar, we started talking about life and spirituality. She opened up about fear and how she's constantly working at it and how difficult it was for her. I spontaneously blurted out "omg, I'm so fucked up. I have all these anxiety issues and I have no idea what to do." We both started laughing. It was special and we connected in that moment. We both knew that it was okay to be struggling and found humor and levity in it.

Also, we had sex. Giggity!