Why do I turn into a stupid slut when I drink? 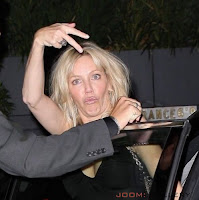 So you know how my nickname is vagiprude? Wellllll the past 2 times I've gone out I drank so much that I blacked out. Like I'm still dancing and everything but I don't recall anything the next day or know what I'm doing. So both of these times, I kissed guys, like random ones at the club!!! AND I DON'T EVER DO THAT! I gave out my number to like a zillion guys and they all state that I initiated the kissing. My question is why is my auto pilot kissing slut? And why am I suddenly blacking out like this? I'm not drinking any more than I have in the past 5 years...

So you've been drinking the same amount, but now are blacking out (black outing?) and kissing dudes, which I'm going to assume are related.

The best explanation I can think of is that you're metabolizing the alcohol faster than before. Blacking out isn't just a function of how much you drink, but the rate at which you drink it. So in theory, you could be drinking the same amount, just drinking it differently, i.e., drinking faster taking more shots than usual, etc. You could also not be eating enough before you drink. Food delays the absorption of alcohol into your system, so not eating would mean that alcohol is being metabolized faster, thus leading to a greater chance of blacking out. More alcohol in your system at once means fewer inhibitions, which explains the sudden emergence of your (not-so-)slutty behavior. If you want to stop blacking out, start drinking wine.

But there's another aspect of your question that's nagging at me and hopefully at my perspicacious readers: WTF is this girl complaining about? So you kissed a few guys when you got drunk. Who hasn't? Hell, I've probably kissed a guy when I was drunk. I'm probably kissing someone right now. So really, what's the big deal?

So I started thinking about it some more, wondering what's going on in your head, and here's what I got. Most people wouldn't have a big issue with making out when they're drunk because they wish they could make out when they're sober. They understand what's going on when they drink and embrace it. You, on the other hand, condemn it. You make it sound as if someone else is steering the ship when you're drunk, but the truth is, it's still you. You're just unwilling to accept that into your identity, preferring to see yourself as a prudent, restrained woman. And thus we have conflict.

Why do you want to see yourself that way? I don't know. I don't even know if you know. Maybe it's for the attention you get from guys when you say "sorry, I don't do that unless I'm drunk," maybe you were raised thinking it's wrong, or maybe it's just something you do to distinguish yourself from others. Maybe, just maybe*, you like to set up a conflict between the person you want to be and the person you think you should be so you can play the role of the confused, frustrated girl and solicit advice from brilliant minds like mine.

I don't have any preference as to what you do with your lips. If you want to kiss guys, go for it, and if you don't, then don't. But I am a proponent of insight, self-honesty, and simplicity. If you're interested or ready, ask yourself: why am I so adamant about being perceived as a prude? What's the payoff? What happens if I don't? What will I suddenly lose out on? My purpose isn't to convert you either way, but to help you see the big picture and silence some of your mental chatter.

* This is the right answer, lol.

Email ThisBlogThis!Share to TwitterShare to FacebookShare to Pinterest
Read more about growth, identity, self image, sex

If you don't like what's happening when you drink, maybe you should consider changing how much you drink! (You should at least wonder what motivates you to do it.) Action A leads to B, and you can control action A. So if you don't like B, don't do A...

I like the simplicity of that, but do you really think she doesn't like the the effects of B? I think she does, and I think she likes the conflict it creates between who she says she wants to be and who she really is. Regardless, I do like what you said.

We should meet up for a drink tonight.

Lets hope you're the girl who sent in the question.

You are a whore

I think she was asking why her immediate response to being drunk is to get intimate with strangers. This was utterly unhelpful. People don't want to feel trashy, that's why one would want to be perceived as prudent. No one wants to embrace being the town tart, but I digress. I too, wonder why alcohol brings out an audacious, promiscuous side of me that I never see when sober. It's strange, the things I've been told I've said. They don't coincide with me at all.